Video from our ride today.
Posted by froglander at 4:33 PM No comments: 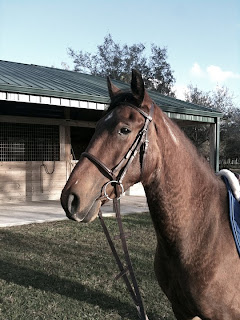 There is a place called Sunset Feed a mile from our apartment. Nice place, nice people, could use a bit more in the horse tack department, but it's not bad.
They had a sale awhile back (okay, it was Thanksgiving weekend) and clearance stuff was half off the already marked down price. How could I pass that up? I found a nice english bridle for a nice price, and a royal blue saddle pad.
Today, I went out to the barn and when we (fiance came with me) got out there it turned out there was a birthday party going on. Barn owner (nice gal) came over to talk when she saw us heading to the barn and she said the round pen was fine to use. So I got Cody all tacked up and off we went to play in the round pen. I have some video that needs to be edited that I hope to upload later.
Cody has been here two weeks today. The first week was just spent trying to brush out a lot of his shedding coat and letting him settle in a bit. Oh, and he has trimmed whiskers and a bridle path now. Never seen clippers before and he just stood there while I trimmed him up a bit. I wonder sometimes if he came in from the wild already trained...
This past week we were back to working by the moonlight. Turns out even though he has had the last 5 months off he hasn't really lost much. I even ground drove him with a bit for the first time this week. The arena was a bit of a lake because there had been a downpour earlier that day so we just went back and forth and did figure eights alongside the barn. Got one other ground driving session in before today, out in the arena and we wove in and out of cones and such. Climbed on bareback for about a minute and a half one night and once with my english saddle on for maybe all of three minutes this past Sunday.
Today we rode for 10-15 minutes, in the round pen, with a bit, with noisy kids and a fire going in a fire pit not far from where we were, with chickens wandering around along one side of the round pen, you get the idea. Cody didn't appear to care. We practiced turning and stopping and backing (I've never ridden him with a bit, just with the rope halter with side rings) and he did awesome.
At this rate, I think he really will be ready for me to ride him in my upcoming wedding (May 15). Lol, I basically have as much time to get him ready for that as trainers do for a Mustang Makeover, think we can do it?
Posted by froglander at 3:45 PM 1 comment: