I've been wanting to ask Cody to lope for a week or two or three now but was lacking the guts to get it done. My friend Diane (who owns the place where Cody is staying for the summer) was going to come out and be that extra bit of encouragement that I needed this evening, but something came up and she wasn't able to.

I had been riding him around the arena for a bit, he was trotting off nicely and we were turning okay and the thunder and lightning didn't seem to be bothering him. So I argued with myself and decided "you're going to do this!" and we started trotting a circle and I started asking him to canter. I've always kissed for a canter from the ground and he responds well. With me on his back he was just trotting faster and faster so we stopped for a moment so I could talk myself into following through. Off into another circle at a trot and this time I made a longer kissing sound and he figured out what I was asking and off we went! We cantered a few strides, maybe a third of a circle and I asked him to whoa and he did and I told him what a good boy he was. And then off we went to do it again! To top it all off, the few strides I did get tonight felt like it was going to be pretty smooth :)
Posted by froglander at 9:45 PM 2 comments:

Just a quick shot with my phone after we rode today. 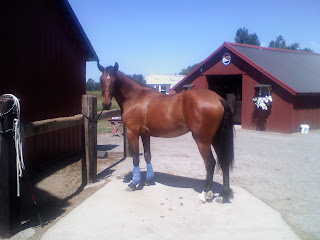 Cody having fun in the arena

Well, I have ridden my pony 16 times now, he is doing really well :) Don't have any video of that unfortunately, but here is a video of him just kicking up his heels and having fun in the arena (got there too late to really have time to ride). It's a bit dark as it was late, but you can still sorta see, lol.